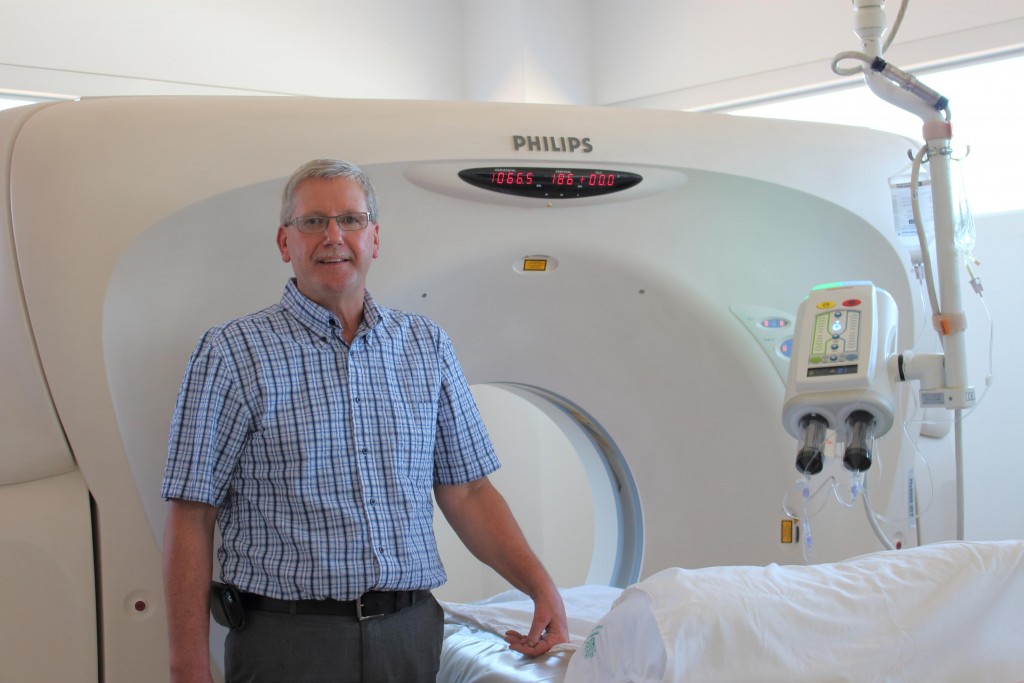 “Having a new CT Scan at Prince County Hospital is a matter of life and death.” That is the message that Gerard McCardle wants to pass along to the people of Prince Edward Island. “People need to know this should be a number one priority for all island residents.” This year the PCH Foundation must raise over $2.27 million for equipment including a new CT Scan machine valued at $1 million on its own. CT stands for Computed Tomography, commonly known as a CAT Scan. Gerard knows first hand the importance of having a fully operational CT Scan at Prince County Hospital (PCH). It has twice saved his life from rare medical abnormalities.

While attending a meeting in 2007, Gerard was overcome with intense abdominal pain. He was rushed to PCH where, based on the information available, he was diagnosed and treated for a kidney stone. The pain subsided and all seemed fine. The pain returned that fall and Gerard was again admitted to PCH. It no longer seemed to be kidney stones, but there was no doubt of his pain. The location and intensity of the pain was perplexing as nothing showed on X-rays or blood tests. It wasn’t until Gerard’s family doctor suggested a CT Scan that things became clear and a second scan with dye contrast was even more revealing. He was rushed to Moncton for surgery with his family physician, Dr. Nicholson, by his side. It turns out Gerard has a rare condition called Celiac Axis Dissection in which the celiac artery that supplies blood to the liver, spleen and upper bowel separates and the blood flow is compromised. Without immediate action, those vital organs become oxygen deprived, causing death. Luckily, Gerard’s condition was detected before it killed him. He was told a conventional x-ray could not have found it. Without those CT Scans, Gerard may have died.

For five years, Gerard seemed fine; but then the pain returned on the opposite side and seemed worse than ever. Gerard was once again rushed to PCH. Given his history with his rare ailment, a CT Scan was performed. The scan revealed that a blood clot had attacked his kidney – another rarity. Again, Gerard was fortunate the clot did not travel to his heart causing cardiac arrest or to his brain causing an aneurysm.

Gerard counts himself lucky that PCH was equipped to meet his potentially life threatening needs. His case and others have been diagnosed at PCH thanks to updated medical equipment such as the CT Scan. However, after over a decade of dedicated use (20 – 25 cases per day, not including emergency use), the CT Scan machine is showing its age and must be replaced. Downtime is increasing, leading to longer wait times, and image quality standards have increased dramatically. “My nightmares have turned out well,” Gerard stressed. “But a lot of people don’t understand how important CT is. I know the importance of it. And whether you can give $5, $10 or $5,000, we need your help. Many people don’t realize what a difference their dollars can make.”

Though it is incredibly important and makes up nearly half of the $2.27 million goal, CT Scan is not the only need at PCH this year. The greatest needs for PCH have been identified and include items such as a portable ultrasound for Maternal Child Care ($35,000), a stress test machine ($37,000), and a number of new scopes and towers ($495,000). Though equipment on the list can vary from highly technical to basic items like new stretchers, each piece on the greatest needs list is vital to patient care in its own way.

To help the PCH Foundation provide much needed medical equipment this year, visit the Foundation office in the lobby at PCH, give securely online at here or call (902) 432-2547. Donor packages for the Vital Signs Greatest Needs Appeal can be mailed upon request.