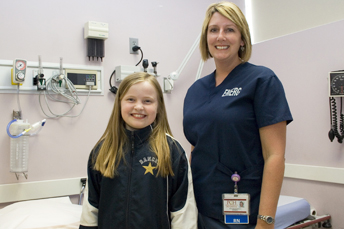 How I Spent My March Break – with Anna Smith

Over the course of two months, ten-year-old Anna Smith developed what
was thought to be a mole that didn’t seem abnormal, but became
increasingly annoying. One Sunday she noticed a hard ball under the
spot on her left arm. By Wednesday there was a dime-sized red circle
around the spot. By the following day it had grown to the size of a
toonie and had become a great concern to both her and her mother Lisa.
“It really bugged me,” Anna explained. “I didn’t know what it
was.” That evening, Anna and her mother made a trip to the Emergency
Department (ED) at PCH. The spot was diagnosed as an infection and an
antibiotic was prescribed to clear it up.

In the case of Anna’s infection, an abscess was evident from the
appearance of the skin and the feel of the area, but the first round of
antibiotics were ineffective, as was a second antibiotic and the
infection continued to spread. With the infection still growing
aggressively, Anna and her mother returned to the ED and were seen by
Dr. Steven MacNeill who diagnosed the infection as cellulitis. Dr.
MacNeill, who is highly trained in the field of Emergency Department
Echosonography, used the portable ultrasound machine in the ED to locate
the abscess before draining it and proceeding with 3 rounds of IV
antibiotics over three evenings.

“In a few minutes, Dr. MacNeill had found the source of the infection
under the skin with the ultrasound machine and marked the exact
location. Then he made and incision and drained it,” says Anna’s
mother Lisa Schurman-Smith. “Everyone in ‘Emerge’ was comforting,
warm, and kind, like you were there for a visit.” Anna, remarking on
the ultrasound images, said “It looked pretty cool. You could see
what it looked like on the inside and it looked so much different from
what it looks like on the outside.”
Not all physicians might use the portable ultrasound for this purpose,
as it is an advanced technique, but a very useful one in this case.
Though the abscess was apparent on the surface it was deep and not
easily found by hand. The portable ultrasound can aid in localizing the
abscess and making sure you get into it while attempting to drain it.

This year, the Intensive Care Unit (ICU) is in need of a new Portable
Ultrasound machine much like the one Dr. MacNeill used to find the
source of Anna’s infection. The current machine was once the main
unit in ED and was replaced in 2010 and moved to the ICU. With the new
piece, valued at $50,000, physicians can continue to extend their
physical exam and investigative skills into the body visually. At PCH
this technology is being used on a daily basis to help assess for
potentially life threatening conditions immediately at the bedside,
allowing faster diagnosis and safer discharge of patients.