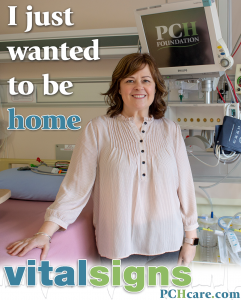 “I just wanted to be home.” This was not the sentiment Angie MacCaull and her husband Mike were hoping for when they set out for a cruise out of Miami. They would never set foot on the boat. Angie was doubled over in pain in her Florida hotel room when they decided to rush back to PEI for treatment. With the severe heaviness in her chest, they knew it was something serious.

In the lead up to the trip, Angie had endured similar attacks. Having ruled out a number of possibilities including a gallbladder issue, through blood work, ultrasounds, electrocardiographs (ECG) and other testing at PCH, she was released with what was thought to be acid reflux. The attending physician encouraged her to return if she had further pain. “It was the best thing he could have said to me,” she remarked.

Upon arrival home, Angie was admitted to PCH for extensive testing. By the next day, it was suggested that a family history of esophageal spasms could be the culprit and she was medicated accordingly. The treatment appeared to be working, and she was able to go home. The attacks returned that night and Angie went back to Emergency where Dr. John Morash ordered further blood work and an ECG. Those results were unremarkable, but when she was up and moving, Angie began having another episode. The Emergency Department staff immediately hooked her back up to the ECG machine and it showed depressions in all leads, indicating a severe heart issue. She was then admitted, treated for unstable heart disease and referred to Dr. Nicole Drost.

­­Angie was found to have an aneurysm in her heart through an echocardiogram ordered by Dr. Drost, who then referred her to a specialist for a dye test in New Brunswick. Luckily, she was able to spend the 2.5 week wait on bed rest here at home in the Prince County Hospital. “The care here was amazing,” she remarked, “It’s good to have (PCH) here.” The dye test revealed 8 blockages in her heart. She dubbed it the “Mother of All Widowmakers.” In New Brunswick, she received a triple bypass and they replaced her aortic root. Angie had done everything right; she ate well, exercised, didn’t smoke…she was at her healthiest. Nonetheless, heart disease had found her.

During her convalescence, her life changed drastically once more; this time for the better. Three months post-operation, Angie and Mike were gifted the opportunity to adopt, becoming parents to a newborn girl they named Brooklyn. “I have a whole new appreciation for life and something new to live for,” Angie said softly.

Angie still has 5 blockages that need to be monitored, but she has a new lease on life. “If the services and equipment were not available at PCH, my problem may not have been detected,” she expressed. “If I’d have gone on that cruise, I don’t think I would have lived. People with a heart like mine don’t usually get a second chance.”

You can help keep care close to home for people like Angie. Click here to give now.