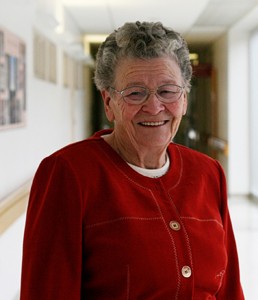 For years Marilla Millar has been the one giving exceptional care. The Ellerslie foster parent has been responsible for the lives of 128 children since 1974. She will be recognized with a honourary degree this spring at UPEI for her dedication to foster parenting. But it is the exceptional care she received at Prince County Hospital that resonates with Mrs. Millar.

Two years ago this very special woman suddenly found herself extremely ill. She was rushed to PCH for medical attention. To determine what was ailing Marilla, a colonoscope was performed in the Ambulatory Care Department at PCH. The results of which were less than desirable…it was cancer. She was diagnosed in May and surgery was performed on June 1st to remove part of her bowel. Two weeks later she began an intense six months of chemotherapy.

Marilla Millar still receives her regular check ups and can boast that she’s doing just fine. Thanks to her care at PCH and her positive attitude, she continues to care for young children as she did throughout her treatment.

This year in our Vital Signs Annual Equipment Campaign we are raising funds for new scopes, both colonoscopes and gastroscopes. As Mrs. Millar will attest, scopes save lives. The new scopes will present images in HRE, High Resolution Endoscopy. Much like your new television at home, it presents pristine high definition images. This will help diagnosticians to see more and with better resolution.